Early Winter in 2010 provided to be a good time to build a deck. The weather was very mild with just enough moisture accumulation to make digging post holes not too much of a troubling process. This deck was built for the same client that I built the Yard Screens for. The screens were actually built this spring and built to match this deck. The discerning eye will notice that the screens use the same balusters as the deck railing and that the 'OG' on the end of the underside deck beam matches the 'OG' on the top of the Yard Screens. Sometimes on larger projects it's nice to have a helping hand, wether for help with the labor or the expertise that they bring to the project. Charley Campbell was just such a help with this project, providing both. 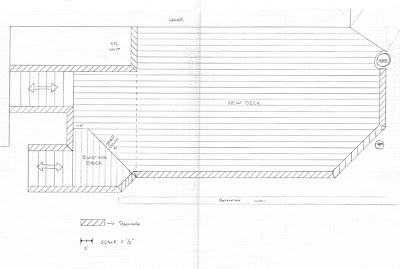 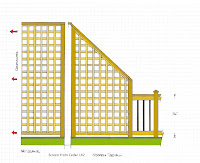 These are the concept drawings for the railing and eight foot privacy screens that were going to be built into the west end of the deck. It was decided that the screens wouldn't be needed and became the basis of the idea for the Yard Screens. 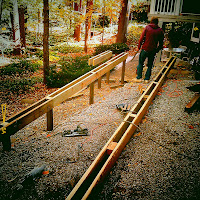 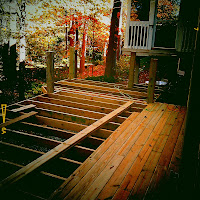 The main support beams are finished in the first image. The joists are done in the second and the decking is starting to be laid while the posts for the rail are being set.

Three views of the finished deck with some snowy footprints.
Posted by Doug Bolt at 2:54 PM

Email ThisBlogThis!Share to TwitterShare to FacebookShare to Pinterest
Labels: All Projects, Decks, Exterior